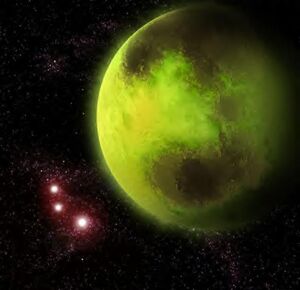 Accilade-6 is an abandoned energon refinement facility, but more importantly.. where Backfire comes from! Boasting to the 'best of the best', the planet is inhabited by rejects and idiots whom the Decepticon Empire would rather soon forget about.

"It is much easier to ask for forgiveness, than permission."

Backfire's mentor and leader of Accilade-6, Fireback is somewhat more inspiring.. more competent.. and looks just like Starscream. Take that for what you will. Loyal and gung-ho, it seems he's instilled at least -some- of his admirable traits onto his student. In robot form, Fireback has access to a couple of different weapons: Hypno-Shell rifile, Galaxial rocket pods, solar hand emitters, glue guns, giant crayons, and whatever else is within hands reach.

"The slower you are, the better I like it!"

Blurry is FAST. Everything about him from his movement to his speech and his though processes all compute faster than you. Deal with it. However, this also comes with its downside as well.. he doesn't think before he acts, usually landing him in the repair bay before the battle has even begun. He acts as Accilade-6's messenger, though with 99.9% of the planet's mass covered in acid.. his job is practically useless. In robot mode, he uses a ELECTRON-LAZOR that speeds up his opponents.. or sometimes he just shoots himself with it. In vehicle mode, he's probably the coolest racer ever known.. though he might have a brother he never knew about who races against him. Or not. His 'quick to action' nature often gets him in more trouble than it's worth.

"You've got no swagger, style, or substance.. FOOL!"

Chances are, Jazzy pities you.. fool. Fireback's right-hand mech in Backfire's absence, this Decepticon is a danger-loving daredevil with a bag of tricks. No, seriously. He has a bag labeled 'Trix'. Whether it contains actual shenanigan goodness or the children's cereal, has yet to be determined. Armed with a dizzying list of gadgets: FOOL-TON Rifle, Extra special spring legs, Headlights, and a bitchin' speaker system. Not only is Jazzy cool, competent, and stylish; chances are he's better at everything than you.. including sports.

"The past is the great.. wait, what was I saying? Oh, right. The pas..Zzzzzzzzzzzz."

Sippy Kup is quite possibly the oldest Transformer ever, he can recall a time when him, Primus, and Unicron were all the bestest buds. But then they had that 'misunderstanding' over a bartab, and well.. it kinda got out of hand from there. A tale for every occasion, no one actually knows if he's merely senile and misremembering this.. or is just a huge fat liar. Probably the latter. Sometimes his advice is useful, but usually it's only complaining about his Decepticon social security payment delays. Still, the -best- shot on Accilade-6; he acts as Fireback's adviser. His arsenal consists of a rock and two sticks, and he has to share the rock.

"Hey, PUNK. You optic-balling me or something? Yeah, I got a stache. Wanna fight about it?"

There's nothing Brawny loves more than a good fight, or some more robo-roids. Strong and short tempered, if anything.. just don't make fun of his tiny size. Looks down on everyone who isn't as tough and strong as he is, which he think is pretty much everyone. Is very proud of his stache, kinda resembles a paper-towel spokesperson. Maybe. Strongest Decepticon on Accilade-6, boasts a bench press of your motherboard.

Retrieved from "https://transformers2005.fandom.com/wiki/Accilade-6_Inhabitants?oldid=22605"
Community content is available under CC-BY-SA unless otherwise noted.