"The road to conquest is paved with Autobot wrecks."

Bruticus is a model soldier...cool, efficient, unquestioning. Enormous strength -- has 14,000 psi punch, can lift up to 500,000 lbs. Impervious to most artillery and radiation. Uses Onslaught's sonic stun-gun. Knows how to follow orders, but is incapable of taking the initiative. Bruticus is a fairly successful merging of the minds and personalities of the five Combaticons who comprise him. 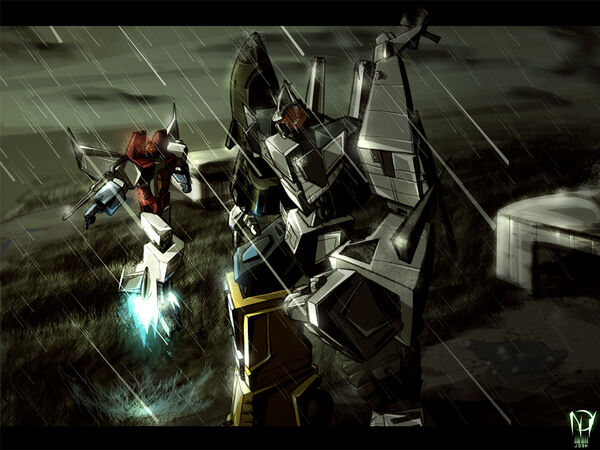 When Starscream needed a private army, he went for the best one he could find. He busted the Combaticons out of jail (or rather their brains out of storage) and rebuilt them in new Earth-compatible bodies with the ability to merge to form Bruticus. They attacked Megatron and the other Decepticons, and after some initial successes were exiled to an asteroid in deep space. Onslaught used his giant brain to figure out to tie Blast Off to the asteroid and have him tow it back to Cybertron. Once there, they attacked Darkmount, obliging Shockwave to come out and fight them before they destroyed all of his drones. Although he shot Bruticus in the face, they grabbed him and forced him into his gun mode, which they then used to defeat the rest of the drones in an awesome way. The Decepticons had to team up with the Autobots to beat Bruticus, and Optimus Prime as usual believed Megatron when he said that he had destroyed Bruticus. Actually Bruticus was so awesome this time that Megatron just made a hologram of him being destroyed and in fact had an emergency stop button installed in the middle of his back just in case they got TOO awesome after being reintegrated into the Decepticons.