A planet made up of metal and machinery, with deep tunnels under the surface that hold dark and dangerous secrets best left forgotten, Cybertron has been the main battlefield for the Autobots and Decepticons since the war began. Originally an asteroid used by Primus as he began his work in robotics, it was eventually run down and depleted of energy due to the war. It was then moved to the Alpha Centauri System in 2029, where solar power is slowly rejuvenating the planet. 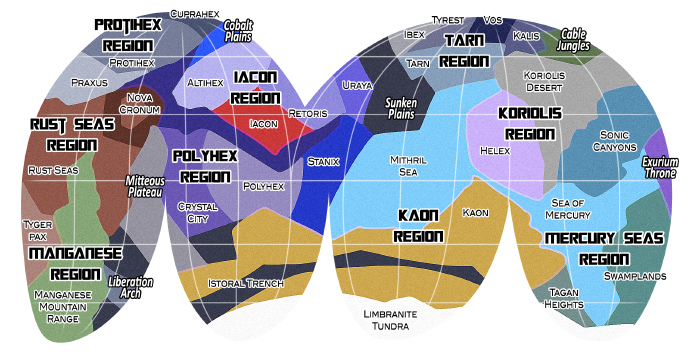 Scourge's pet project, Nightsiege was constructed in 2009 as a tribute to the then Aerospace Division. With the destruction of Darkmount in 2013, Imperial Headquarters was built there as the new Decepticon base of operations. Unlike Polyhex, the city has been attacked several times, receiving varying amounts of damage, but has never been taken.

Originally a Decepticon city, the inhabitants of Vilnacron were abandoned to their own devices during the long millennia of energon deprivation, and the city degenerated into the stereotypical hive of scum and villainy. Eventually a leader arose to unite the city into a prosperous venture. With the city actually having some value then, Galvatron attempted to annex it in 2008, and the majority of the most productive citizens simply moved out into the secretly-constructed underground city of New Vilnacron, taking everything that wasn't nailed down and abandoning the rest to Galvatron. The empty city was loosely controlled by the Decepticons for a few years before the massive Quintesson assault in 2017 reduced it to worthless rubble.

Constructed secretly over several months in 2008, the underground city of New Vilnacron was intended to be completely neutral from the beginning, favoring neither the Autobots nor the Decepticons. Until 2010, it prospered, when the city's ruler publicly defied Galvatron. With the aid of a high ranking traitor, the Decepticon forces were given entrance into the city and set off bombs that destroyed the massive supports and collapsed the ceiling. A delay in the attack allowed the city's civilians to be evacuated in commandeered alien freighters, some of which were absorbed by the Decepticons, some by the Autobots, but with the majority departing Cybertron for Monacus or parts unknown.

The Autobots' HQ on Cybertron after the first defeat of Unicron, the facility served well until Iacon was rebuilt to house the expanded Autobot numbers. It saw rare use after that, mothballed for the most part until a strike force of Decepticons led by Scourge devastated the base completely in 2018 as a precursor to the destruction of Iacon.

Secretly rebuilt in 2018 from secret staging grounds in Primus' Workshop, Iahex is the newest Autobot city/base. Though not a cityformer, it is capable of transforming to a battlestation mode for better defensive capabilities. It was supposedly destroyed again by Galvatron and Devastator, but the destruction was a facade.

Years ago, the Scrap Yard was claimed by the Autobots' Junkion allies for their own, and using the raw materials salvaged there, they eventually constructed their own cityformer Cinaplex in 2008. After Iacon was destroyed and Iahex built in 2018, Cinaplex was moved into Iahex, and the Scrap Yard abandoned.

Founded by Autobots in 2007 but taken by the Decepticons under Avatar in 2013, the outpost was populated by Decepticon factory workers until an altercation in 2019, when they sided with the Autobots and were eventually absorbed by them. The very useful factory remained in Autobot hands until 2025, when it was hit by a major Decepticon offense that resulted in its complete destruction and irradiation.

Once a Decepticon stronghold from which attacks on nearby Iacon were launched, Agorahex was hotly contested because of its strategic location. It changed hands frequently and was finally destroyed by a reactor meltdown during a Decepticon attack in 2021. No longer of any use to anyone, it is currently an irradiated mess.

Originally the Temple of Primus as administered by the late Excelsius, when Primus was discovered to be a Quintesson, it lost its value as a religious site and became a historical one. The Autobots sheltered here after Iacon was destroyed, basing their construction of Iahex from a stolen spacebridge installed here. After the Autobots completed Iahex, it was abandoned again.

Retrieved from "https://transformers2005.fandom.com/wiki/Cybertron?oldid=34491"
Community content is available under CC-BY-SA unless otherwise noted.