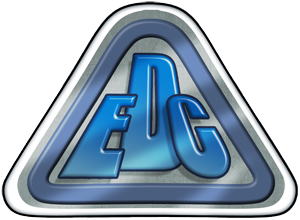 Earth is defended by Earth Defense Command, a UN agency that uses advance technology to combat threats to Earth, both at home and abroad.

Humans are becoming more adept at handling Transformer aggression towards the Earth, allowing them to retake control of their planet.

Through adapted Cybertronian technology, the warriors of the EDC are seeing the light at the end of the tunnel in this war and are becoming major players throughout the galaxy.

In October of 1988, Carly's father, a retired general, created a political organization known as the EDC (Earth Defense Coalition). Since then, the organization has gone through many changes. It has been a military branch of the United Nations and a privately owned corporation, owned first by Bryant Enterprises and then by the Militant Chikome-Ollin after a buyout of all the company stocks. Warlord (now General) Ollin turned the remnants of the EDC back over to the UN during the Decepticon occupation of Earth, when it was given the name it carries to this day: Earth Defense Command.

From its inception, the EDC has been led by Commander Marissa Faireborn, a devoted and loyal soldier with a renowned military heritage. A perfectionist, she is an excellent officer and leader, but her temper flares when her patience is tried during times of high stress.

While EDC standard issue is the powered combat exo-suit, serving to enhance a human solder's durability, mobility, and firepower, the EDC contains specialists of all kinds, from ace pilots to motorcycle daredevils.

The EDC owes it's rapid response ability on Earth to high speed dropships, and an advanced 'ground bridge' network designed by the Autobots after their own spacebridge technology. The groudnbridge hub in Guardian City connects all EDC outposts into a single vast defense network.

Most nations still maintain standing armies with somewhat lessened weaponry. While these armed forces are usually no match for Decepticons, their bases are found all over the world and are instrumental in giving aid to both the Autobots and EDC, as well as more mundane tasks such as evacuating civilians and tracking enemy positions.

Retrieved from "https://transformers2005.fandom.com/wiki/Earth_Defense_Command?oldid=34803"
Community content is available under CC-BY-SA unless otherwise noted.