Note: 'Unaffiliated' characters are no longer allowed. Please pick one of the available factions. 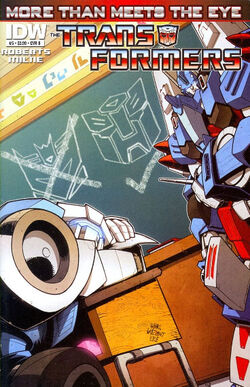 Transformers 2005 has four major factions available for application. The factions are not restricted by species, although odd combinations (a human Decepticon or a Quintesson Junkion) will take extremely thorough justification.

Most of the available factions have an established faction head. There are also common goals and guidelines for RP within a particular faction. To find out more, see the following applicable file(s):

The Decepticons are a Cybertronian faction known largely their amoral views of the universe around them, and the great atrocities they've inflicted upon it. They consider themselves the ultimate form of life in existence and believe it to be their Manifest Destiny to unite the races of the Universe under their rule. Once this is accomplished, the galaxy will become a single entity of unimaginable power, greater even than Unicron or the entire Quintesson Empire. Consequently, all sentient races shall benefit...and the goal of ensuring Cybertron's complete and total security from any threats will be accomplished. While fearsome and even brutal tactics are used by the Decepticons, they see it as the ends justifying the means. The successful uniting of the galaxy under the Decepticon Banner is the foremost concern of the faction...all else is secondary to that.

The Junkions are from the planet of Junk, which was found during the year 2005 by several Autobots. They are offshoots of Transformers, and have been so for over ten million years. Their transformable bodies are essentially made up of junk. This has the disadvantage of being made of an array of substandard, haphazard, and technologically inferior parts. The advantage is many redundant systems, and the ability to jury-rig themselves with a minimum of spare parts.

The Earth Defense Command is the Terrans' first line of defense against outside threats. It stands for freedom for all humans and the common defense of Earth. This often calls for a response to threats by the Transformers. The humans are becoming more adept at handling Transformer aggression towards the Earth, allowing them to retake control of their planet. Through adapted Cybertronian technology, the warriors of the EDC are seeing the light at the end of the tunnel in this war and are becoming major players in the drama on Earth.

Retrieved from "https://transformers2005.fandom.com/wiki/Factions?oldid=30600"
Community content is available under CC-BY-SA unless otherwise noted.