"I'll show you just how much size matters."

Fury is a parasite fighter, X-85 Goblin. In her robot mode, her armaments consist of arm-mounted machine guns, as well as flame throwers. In her plane mode, she's got her cannons and firebombs. She's one of the most vicious of the Decepticons, capable of anger entirely out of proportion to her size. With her thrust to mass ratio, she's extremely swift. She's also wordy, talkative, impatient, and loves charging into battle at the head of her comrades. 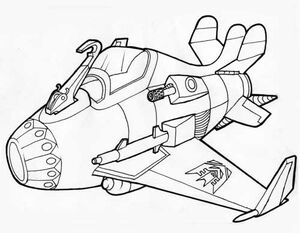 Retrieved from "https://transformers2005.fandom.com/wiki/Fury?oldid=12289"
Community content is available under CC-BY-SA unless otherwise noted.