"My power is everything; defeat is absurd!"

Galvatron is determined to lead the Decepticons to victory, crushing the Autobots and claiming Cybertron as his own. Powerful and cunning, with a volatile temper and insatiable ambitions. Equipped with a tremendously powerful fusion cannon which he can use in either mode. Also carries a laser that emits chemically-produced, direct-current electricity.

Galvatron used to be Megatron. No one really knows where Megatron came from. There are several theories including "he was a gladiator on ancient Cybertron," "one day he just showed up on a balcony with Ravage and Soundwave" and "he was built by the Constructicons after building the Constructicons himself in a TIME PARADOX.

Megatron fought Quintessons for a long time. Then he had a disagreement with the Autobots and fought Autobots for a long, long time. They tried to get away in their spaceship, the Ark, and he followed the Ark to Earth in his spaceship, the Nemesis. He boarded the Ark just before it crashed and was knocked unconscious for a very long time. Eventually seismic activity caused the Ark to revive one of the Decepticons, who revived the other Decepticons. They set out to conquer the Earth, which would have been a snap with all the Autobots comatose in the Ark. Starscream then ruined everything by shooting the Ark and causing an Autobot to be revived. If Megatron had known that Starscream was the reason for the whole war after that point he would probably have killed him a lot earlier.

Megatron fought Autobots for another long time although not as long as the previous time. Eventually he discovered that if the Decepticons just set their lasers from "knock over" to "kill" they could win the war in one big (two hour long) fight. Megatron instructed all the Decepticons to do so and even Scavenger was able to kill Prowl in one hit! Megatron was even finally able to kill Optimus Prime thanks to Hot Rod getting in the way of Prime's shot at the last moment. Everything was going terrific until Starscream ruined everything again by pitching Megatron, who was injured in the fight, out into space.

Unicron, a huge fat planet-sized Transformer with godlike powers who sounded like Orson Wells, found Megatron and some dead Seekers and Insecticons and rebuilt Megatron's body, making him faster, stronger, better! Unicron had the technology! Unicron also brought the dead guys back to life as Scourge, Cyclonus, some Sweeps, and Armada, who was just like Cyclonus except that he was forgotten about right away and never seen again.

Unicron renamed Megatron to Galvatron. Galvatron made sure to kill Starscream first thing upon getting back to base, then went on a rampage. He almost had everything under control except that Unicron kept giving him these terrible headaches, and the stupid Autobot Matrix of Leadership wouldn't open no matter how hard he pulled on it (he didn't know to put his fingers in the finger-holes). Unfortunately it would open for Hot Rod, who was transformed into a bigger, older version of himself, Rodimus Prime. Rodimus pitched Galvatron back out into space and destroyed Unicron with the power of rock & roll.

Galvatron hates Hot Rod so much.

Galvatron's mad doppelganger ruled the Decepticons for a year, becoming progressively more and more unhinged, which no one seemed to pay much attention to. Eventually, in September 2030, the real Galvatron broke free, killed Armada, and took back leadership of the Decepticons once and for all. Unfortunately, the "true" Galvatron is also something of a raving maniac, so anyone who was going to celebrate the change of leadership was going to be a little disappointed.

The paradigm shift would occur when Galvatron, mad with a scheme to move Cybertron, was thrown into the heart of the planet's engine -- shattering a lense of power. The shattered lense teleported Galvatron to an unknown location in space. Just what happened in the following week is a mystery and Galvatron to this day will not speak of it. Returning in a blaze of glory, Galvatron seemed to revert back to his more collected (Nimoy) self prior to being permanently traumatized by the power of Rodimus' Rock & Roll.

* Several Transformers had their bodies transferred to an alternate dimension and their minds imprisoned in human bodies during the Human Nature TP. This included Galvatron. The Decepticons were trying to find a way to restore Galvatron to a proper Decepticon body, so they settled for transferring his mind to an Avatar shell, as Avatar looks almost exactly like Megatron and, well, that's the next best thing.

To infinity, and beyond!

Your lack of faith irritates me. 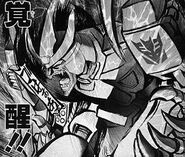 The stuff of Autobot nightmares!

The future's so bright, I gotta wear a constant look of dissatisfaction. 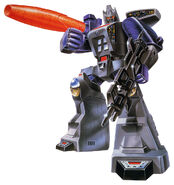 We can rebuild him. We have the technology.

Destroying children's expectations since 1986. HOW EVIL

You are not worthy.

I am power incarnate!

And I would've gotten away with it, too, if it weren't for that meddling winnebago!

Some one is going to have a bad day.

Galvatron is Megatron's nightmare. Isn't /that/ a scary thought?

Wreck and rule THIS! 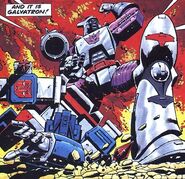 Your pain amuses me. 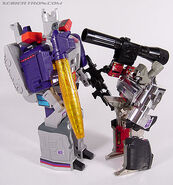 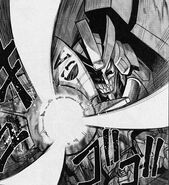 Not a word, Cyclonus!