"The mind is the greatest weapon."

A strategist and a tactician with few equals. Generally puts more effort into the detailed planning stages of a mission than into actual combat, but is a relentless, furious fighter when stirred into action. As a missile trailer, Onslaught is capable of launching 6500-mile range photon missiles, each equivalent to 3000 tons of TNT. Accuracy of missiles is hampered by electromagnetic interference. Uses powerful sonic stun gun in robot mode. Utilizes stationary battlestation mode for reconaissance and defensive purposes, armed with photon missiles and ballistic rockets. Joins with fellow Combaticons to form Bruticus.

Bad Company - Five Finger Death Punch
The Combaticons are a military unit turned mercenary faction currently serving the Decepticon faction in exchange for Energon and other varied resources. Under the command of the mighty Onslaught, the Combaticons seek out and destroy their enemies with incredible precision and relentless fury. They are, without a shadow of a doubt, a very Bad Company.

Oh No You Didn't - Wohjan Brothers
Interesting. Onslaught has led the Combaticons to yet another victory over the pitiful Autobot forces. Missions and assignments have been completed with strategic skill and impressive viciousness. Yet, you have chosen to attempt to renege on the terms that were previously agreed upon. Tis a shame, really. For now Onslaught has no choice but to seek out and destroy everything that you hold dear, before destroying you with utter disregard for your pain and suffering at his hands.

Ain't No Rest For The Wicked - Cage The Elephant
Clearly, Onslaught's sophistication and incredible tactical mind are too much for most mechs to keep up with. He is a Mech with an invaluable talent for strategy and tactics, therefore making him worth much more than the menial drones that fill up the Decepticon ranks. His mind, however, does not turn itself off. It is almost a curse that he is always a few steps ahead of those that are not privy to working on the same mental wavelength. There truly will never be any rest for the wickedness that Onslaught creates.

Bodies - Drowning Pool
As a unit, the Combaticons are one of the most effective within the Decepticon ranks. Together, they are capable of using their combined skills and abilities to turn the tide in almost any skirmish. They are particularly well versed in creating situations that leave piles of bodies in their wake. They are impressive fighters and heavily trained in military tactics and strategies. You would do well to remember that, if the Combaticons are involved, that the bodies will, indeed, hit the floor.

"I trust him about as much as I like him. He does, however, have his uses and for that I keep him around... and intact. Somewhat."

Onslaught has begun to see that his primary loadout is unbecoming of being the Combaticon Commander and has begun to take steps in the direction of upgrading himself to be able to function in hostile environments and to be a better commander for his team. He will never admit to these inadequacies, as they are simply flaws in his initial design that can, and will, be fixed.

Onslaught's mind is his greatest weapon. Therefore, possessing the optimal equipment and cyber enhancements needed to out-think his opponents is necessary. After many T-Spec Diagnostic Exams, Onslaught has realized that his mind is incapable of processing raw data and information in a manner that is conducive with his projected expertise. Therefore, he is looking to advance his mind through a Strategic and Tactical Cyber Enhancement Process of his own design.

Intel MicroWare
A product of his own design, these Intel MicroWare chips are designed to boost a subject's Intelligence and thus allow the subject to access, process and redistribute information in a more logical and strategic manner. The preliminary production cost for this experimental hardware is 24,000 Shanix.

TechNodes
A product of his own design, these enhancement nodules, affectionally referred to as TechNodes, are designed to significantly upgrade a subject's technical prowess. By accessing the technologically dedicated processors in a subject's mind, they work constantly to clear out distraction through applied white noise displacement and allow a subject to access, at least, another 8% of their mind. The preliminary production cost for this experimental hardware is 32,000 Shanix.

Onslaught has taken it upon himself to work towards having a more hands on approach to commanding his Combaticons. While it is true that his mind is allegedly unmatched, there is more to being a successful commander than simply pointing and yelling 'Charge!' or anything in that same lane. Therefore, through research based on the results of his T-Spec Diagnostic Exams, Onslaught is striving towards getting an Engineering Subsystem installed to further his goals.

FXT Diagnostic Program
The FXT Diagnostic Program is a highly protected and secure Cybertron designed program located in the heart of Protihex. The program itself, with some tweaking, could be used to create a Cybertronian Engineering Subsystem within a given subject, thus making the capable of operating in a medical capacity.

Onslaught's own internal components have been faltering according to his T-Spec Diagnostic Exams. Out of necessity, Onslaught is focusing on the application of experimental sciences to realign his internal components to function more regularly and more effectively than in his past.

Vocalization Reformatting
In an effort to appear more compassionate or even more charismatic, Onslaught is working on reformatting his vocalization processor to give himself more tones of voice to choose from, as well as bolstering his vocabulary. Through the use of the right words in the right tone at the right time, Onslaught will be able to motivate and inspire his Combaticons to victory. The projected cost for this reformatting sequence is 30,000 Shanix.

Onslaught does not particularly care for violence being the primary tactic to be used when trying to solidify his plans for victory. However, as the Combaticons are a Commando Unit, it has become a necessary tactic to be used when needed. Much like anything else, it is a means to an end and Onslaught is more than willing to allow the installation of programs to further his cause.

D.E.M.O.
Destructive Explosions for Military Operations is a program that, once installed, allows a subject's processor to access demolition designs for the expanded creation and use of explosive devices. The D.E.M.O. is a high end black market program that can prove to be costly, even with Swindle's connections. About 50,000 Shanix.

As the Combaticon Commander as well as the Decepticon Empire's XO, Onslaught is responsible for operations that should be handled on a regular basis, perhaps even every solar cycle. In addition, Onslaught has a constant stream of operations designed from his own personal collection for the betterment of himself and the Combaticons. 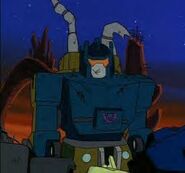 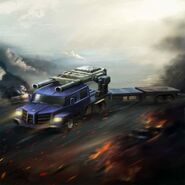 A Plan In Action. 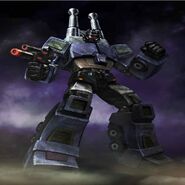 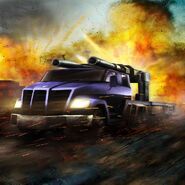 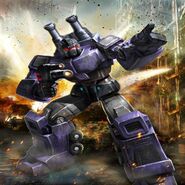 How the smelt do you set this VCR?

Large and In Charge. 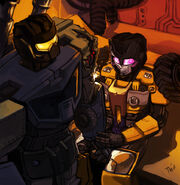 A Little To The Left.