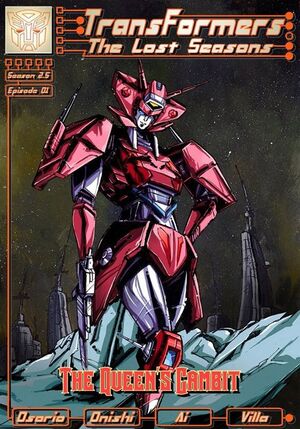 Elita One attempts to subvert the Decepticon control of the drone network on Cybertron.  To do so, Autobot forces must spike into three sections of heavily Con controlled areas!

Operation:HoC:  The plot begins with an accidental discovery.

Counterstrike:  A tactical strike at Magnaron provides the Con forces questions that must be answered

Concurrency:  While the assault on Cuprahex rages above, an Autobot tactical force seeks to lower the shield.  No Endor jokes please.

Shell Game: The upper half of the Concurrency assault, the Autobots attempt to take Cuprahex!

HOC:_Tangency: A Bot and a Con get lost in the middle of Shell Game, they must work together to find their way back...I'm just kidding, they fight to the death.

HOC:_Koriolis_-_Prelude: Blurr is always eager to learn more about the future assaults planned.

HOC:_Cyclone: Korilois Desert and its rust storms set the stage for an assault on a highly fortified bunker

HOC:Queen's_Gambit: The Battle ends at the Mainframe itself, rivalries are concluded and both sides are pushed to the limit!

The Blades Witch Project - Impactor demanded that Blades lead a skirmish. It got weird.