An important facet of this conversion is the fact that your existing mode1 remains unchanged. Whatever stats and abilities you have currently remain the same. (It might be more appropriate to move some combat abilities from mode1 into mode2 instead, however, and you may do so during the conversion)

A new EDC pilot character under this system will consist of two separate point pools:

Updating an existing OC to become an EDC Pilot

Human OCs who came out of chargen without having a combat mode can still have the opportunity to get one in the future.  Characters do evolve after all.  You'll have to basically to do an upgrade RP to show how your character learns the Exo-Suit ability, it may or may not also involve how your character gets his or her vehicle/suit as well depending on the situation.  The human OC will then be given the same 40 CP budget pool ,that one would had normally gotten in chargen, to work with.  From here on out the OC will just follow the same rules and processes in building their combat mode like the previous examples listed above.

These are presented as examples, you are invited to use these as a guideline when creating your own fully custom combat mode! Obviously there are not many points to spare, if you want to be an aircraft or a larger armored truck you will have to sacrifice the versatility that cheaper modes offer.

If you have a useful ability or attack in your human mode, you can enter/exit your vehicle to use that during a scene as well! (The same as transforming)

(with two attacks, this offers lots of room to change one into an Ability, or purchase fancy effects)

(Of course, one could easily mix n'match different abilities in place of crackshot by taking CP away from the weapon or other areas, or this could just as easily be a size 5 mecha instead of a hovercraft!)

some ideas are present in the sample budgets above, but here are some more! 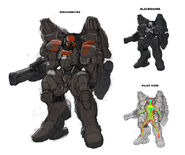 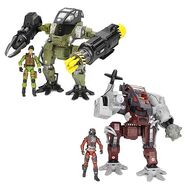 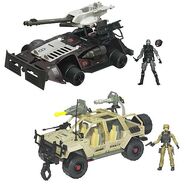 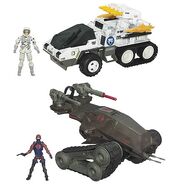 No, just like the original TACS conversion, we will be converting the existing CP cost but you are not able to spend AP to get upgrades without applying for and roleplaying an upgrade. you will have a base pool of CP plus if you upgraded your current object you will be refunded the CP value of those upgrades.

You get one vehicle. The requisite abilities to travel in other environments (Flight, swim, dive, space-walk, etc) are relatively cheap to buy or upgrade.

The minimum size for a combat mode is 3. An example would be a bulky suit of power armor, or a hoverbike. Size 2, skin-tight body armor(such as Iron Man) is not allowed as a combat mode; The minimum size of 3 is required to allow for room for armor, power generators, motors, armaments, on-board computers, life support, etc.

Robots get two modes, but a human with one vehicle mode (or one power armor mode) is two modes. There is nothing stopping you from having your mode1 equipped for combat as well (although probably better suited to a support role and operating allies' [Control]] attacks, that sort of thing). Robots usually have a well-equipped mode1 with a much less armoured mode2, a human just has the modes reversed.

Combat stats in excess of 8 will be dealt with on a case by case basis.

You can use CP (either from the base budget or from a CP refund, if applicable) to buy second purchase discount abilities again at half cost. Many of these have odd-numbered CP values, if you want to buy a second instance of Construction you can pay 2CP from your combat mode budget and 5AP.

If you are an alt-U human and you already got a TACS conversion and exchanged your armor mode for a vehicle object it is probably best to follow the conversion rules above just like the extant EDC pilots. If you are alt-U human who did not receive a TACS conversion and did not have their armor mode stripped you will likely be converted to TACS in an as-is form, but you can re-distribute your ability/attack points. (no, you don't get any abilities twice for free)

If you are applying for a Human OC with a combat mode, please use the following replacement stat section for your application:

Banked AP: If you are adding Character Points from previous characters, tell us where the CP are coming from here. Make sure to follow the rules for converting AP to CP.

Total CP from Other Characters: