The Quintessons once controlled one of the most powerful empires to span the stars. In recent millennia, however, their power has dwindled as individual races have broken free from their stranglehold. The Quintessons have lost nearly all of their power, but many races remember their legendary Empire and fear their return to the galactic stage. One-faced bipedal models have the lowest rank. Upper class Quintessons generally resemble an upside-down teardrop with three to five 'faces' facing outwards. Typically, those with five faces are more respected. Quintessons have uneasy relations with most other races, as many were victims of their old Empire.

Neocron was a Quintesson attempt to resurrect Unicron and establish a new homeworld for themselves. It failed and was thought to have been destroyed.

Most Quintessons left this universe for another one during the Vector Zeta debacle. They are thought to be nearly extinct in this universe now. 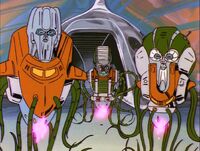 Note: Unless you are a Quintesson, chances are you know absolutely nothing about anything in this file ICly. If you have any questions, please talk to a member of TPstaff.

In 2017, after a failed Quintesson invasion of Cybertron, the Decepticons launched a counterattack against Quintessa. The planet was destroyed and the Quintessons scattered. Another Quintesson occupation of Cybertron was thwarted by the Cybertronians in 2019. There are only two remaining powerful Quintesson figures: Astracius and Exterminatius.

A common belief is that all Quintessons are evil. This is inaccurate as most are merely loyal to their empire and their own version of justice. The current Quintesson Empire is constantly making efforts to retake Cybertron and capture its former slaves, the Transformers. Trading agreements with various other species have provided the Quintessons with another means of increasing their influence.

More recently, while losing Trokius in battle with the Junkion cityformer Cineplex, the Quintessons gained a new homeworld, Neocron. Thereafter they were not heard from or seen till a series of incidents made it clear this ancient race are still a threat.

Somewhere on a planet on the edge of the galactic rim, a tentacled, octopus-like race evolves in a watery environment. They develop sentience and technology over the years, the evolutionary pressures of the deadly undersea world influencing their culture: it is one of subtle violence, evasion, every-Quint-for-itself. Civilization is difficult in such an environment, and the only way that the Quints manage to coexist is by forming a rigid structure of customs and laws, whose main function is to justify the fact of their lives: that might makes right. Reproduction requires a trio of beings, who all mingle genetic matter to form a cluster of eggs, which hatch into the violent environment and have to struggle for survival.

They begin to enhance themselves with technology, using it to extend their lifespans, increase their intelligence, give them new weapons to defend themselves against the other denizens of the deep.

The climate of their world changes suddenly, as a large comet passes through the system and moves their world slightly to a further-out orbit... icecaps form and more and more land begins to be exposed... very slightly inhabited and rich with mineral deposits more easily mined than those of the ocean. The Quintessons deliberate and begin to construct apparatuses that allow them to move about the land. They begin to study the sky and realize that there are other worlds out there and begin to spend more and more time within the apparati and on the surface. Over time, they begin to genetically engineer themselves into forms that integrate with more and more sophisticated apparati, until they become merged. The Quintessons have no religion other than that of survival and prosperity, and have no qualms about altering their bodies or becoming cyborg beings. Reproduction is handed over to an engineered process, and the Quintessons become effectively neuter.

They build their first tentative spaceships and head out to first the worlds of their system, then, after time goes on and FTL drive is discovered, to other systems. They encounter other sentient life and react in the way their environment programmed them to react: with subtle violence intended to result in their survival and profit. They stimulate internal conflicts and entangle worlds in quarrels. They get into the business of selling arms and find it a profitable one. Their entire civilization is geared towards the destruction of other civilizations and the profit of their own: it is the only way they know how to survive.

However, there are a few odd Quints in the mix, influenced by the belief structures of other civilizations they encounter, who think there should be more to life than that...

The Quintessons are discussed further in the entry for Cybertron.