The Galaxy is inhabited by thousands of different species. Some of them are intelligent; others less so. The Cybertronian Civil War, as it is known, is a tiny but influential part of Galactic politics. Nearly all races avoid the dispute, knowing that it has been going on for millions of years and will likely continue to do so. This belief has only been encouraged now that Earth has been swept up into the war and turned into a battlefield.

Aliens on Transformers: 2K5 are often inspired by the cartoon or comic. Keep in mind that the only thing that is canon at 2K5 is the movie. That means that Seaspray did not have an Atlantician girlfriend, and the race from Carnage in C Minor is not nearly so annoying.

Junkions are an off-shoot race of the Cybertronians, made up of junk! Their culture is heavily influenced by the broadcasting and entertainment media of other races.

Brandax was once a peaceful planet content to stay out of galactic affairs, but this changed after the Decepticons raided their planet in 2018, stealing many of their resources. While the Decepticons successfully hid their tracks and avoided being proved guilty, many assumed that they were responsible. Since then, the Brandaxians have championed other causes, striving to stick up for the "little guy" in most disputes.

Brandaxians appear similar to humans aside from their facial features. They have good relations with most other races, and although their power is limited, many other planets are sympathetic to their cause.

The Insectoids are, as the name implies, insect-like. They possess a strict social structure and each member of the race has a specific task, such as construction, warfare, diplomacy, or farming. Most are only interested in carrying out their function, leading to the widespread belief that they are little more than drones. Only a few appear to be truly individualized. An Insectoid diplomat mediated the dispute during the Brandax incident in 2018. Overall, they seek peaceful coexistence.

Insectoids appear similar to giant ants, standing nine feet tall when fully upright. They possess mandibles and claws and usually walk on their four hind legs. Insectoids possess excellent relations with most other races. The Insectoid Empire, based from their home planet Clakta, possesses a fair amount of power. 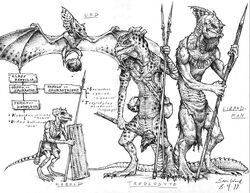 The Lizardmen exist on the marshy planet of Thist in a remote arm of the galaxy. There are few resources to be found there, and those that do exist are in the hands of a few noble lords. The rest of the population lives in near-servitude, with little education or hope of any change. Those who want to escape this life generally go off-planet to work as mercenaries or laborers. Other planets view the Lizardmen as somewhat backwards, but concede that they serve an important purpose.

Lizardmen are scaly and humanoid in appearance, with reptilian faces and deep-set, shifty eyes. Their color can range in color from green to blue, and it is generally believed that the most noble Lizardmen have the darkest blue tones to their skin.

The Nebulans (or Nebulons, Nebulese) live and work on a distant planet close to the galactic hub. Their planet is rich in resources and the people live in peaceful co-existence, having put away their weapons many centuries ago. There have been some hints of dissent in the past, mostly from descendants of the displaced nobility, but harmony has always prevailed. In accordance with their overall philosophy, the Nebulans have always advocated peace on the galactic stage. Their dogged commitment to pacifism has led to criticism from other races, who wonder if their outlook would change if it were truly tested.

Retrieved from "https://transformers2005.fandom.com/wiki/Races?oldid=30369"
Community content is available under CC-BY-SA unless otherwise noted.