Rumble is your basic street punk. Small, but always acting tough. Quick temper and mean disposition toward enemies, though he follows his superiors' orders eagerly. Transmits immense low frequency groundwaves to create powerful earthquakes. His small size limits his physical strength, but his ability to shatter the ground makes him difficult to approach in a fight.

Rumble was the first tape the Decepticons reactivated on Earth and apart from Laserbeak, the only one they bothered to. This is because Rumble is a tiny combat monster.

Seriously, don't let him piledrive you in the teeth, because he will. He's the self-proclaimed 'King of the Tapes' for being the first activated and most used. 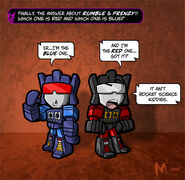