The Impressive Vitals of Scourge

"Desolation follows in my trail."

Scourge is a fearsome, merciless and implacable hunter. Created from Decepticon wreckage, he leads "The Sweeps", a wolf pack of tracker-terminators designed to hunt down and eradicate Autobots. Scourge possesses powerful high-tech scanning equipment and a disintegrator ray that can cut through solid rock. In robot mode, he carries a laser blaster that shoots short bursts of intense heat. Scourge's only weakness is his arrogance.

The Historical Importance of Scourge

Created from the wreckage of dead and dying Decepticons after the Battle of Autobot City. Nobody seems to argue over who he was before being reformatted.

The Personified Excellence of Scourge

The Cruel Intentions of Scourge

Thinning The Herd
Scourge has determined that the Decepticon Forces are in dire need of testing and assessment. Regardless of rank, Scourge has taken it upon himself to seek out and combat every Decepticon aligned with the Empire. Perhaps not for the Empire but for something grander.

The Intimidating Visuals of Scourge 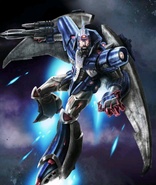 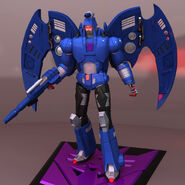 Basically Rob Zombie as a robot. 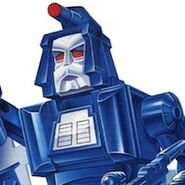 Caution: Matrix-bearing ain't for everyone.

Fully loaded and ready to rock.

"Galvatron, my master! With this, I shall make you my slave!" Deja vu, anyone?

Coming to a Gundam crossover TP near you.

Don't Make Him Break A Nail.

The Terrifying Wrath of Scourge

The Dramatic Interpretation of Scourge