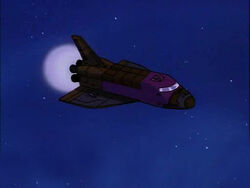 The IC setting of TF2k5 takes place on several different worlds in the galaxy, and because of this, space travel is a daily fact of life for many characters on this MUSH. To avoid the rather sticky technical details of 'hyperspace' or 'warp' technology, all superluminal travel has been lumped under the blanket category of FTL: Faster Than Light.

In order to purchase FTL as an ability, there should be sufficient IC justification for the ability: FTL systems are ICly a costly and extensive modification to have added, and few of the factions on this MUSH have the resources to do this to just anyone. (Obviously, the Flight and Space-Flight abilities are required as well.)

In the interests of fairness and realism, as well as keeping the game system manageable, there are a few basic rules that apply to space travel and FTL:

Although our 'deep space' area is a (relatively) small chunk of the Magellanic Arm of the Milky Way Galaxy, each space room is actually a vast tract of intergalactic real estate that probably spans many light-years. You should not automatically assume that you are near someone or something just because you find yourself in the same room--paging them to agree on where the two of you are is a good idea.

There are 6 directions in deep space:

FTL has been made much easier. Simply use the exits as normal. If you have the FTL ability in your current mode, you may pass. If you do not, then you don't. Note that while RP-wise FTL takes up a lot of energon, for simplicity's sake using the exits do not. RP being tired, exhausted, or out of energon at your convenience.

Shuttles, which are the big honking ships that travel through interstellar space, are occasionally incapable of combat. Their large size and heavy hulls usually protect them from damage, and while traveling at FTL speeds they're untouchable. However, serious damage can make FTL travel impossible. Some shuttles go to the expense of carrying small fighters on board for defense.

A lot of things have almost destroyed the galaxy, but not one attempt has succeeded yet. Pretty much everything, ever, has happened here.